I feel sure most of our FAC’ers are in the know on this, but a few may not be too clear on just what a “Kanone” is. Well, skysters, a Kanone is a who, rather than a what. In the first Big Fuss, 1914 to 1918, the term was coined on the other side of the lines and was used to describe the flyer we would call an “Ace” on our side. Kanone can be translated from German as “cannon.” A looser translation as used by the Kaiser’s airmen meant “big gun” or “big shot.” Rather like today’s term of “top gun.” On our side of the lines you became an ace on scoring your fifth confirmed victory. All except for the Brits. They did not exactly go for the individual heroics, as they thought it might cause their chaps to get a bit reckless. Eventually, they came around to the ace system, but demanded ten confirmed victories before recognition. In truth, most flyers felt quite satisfied to get a single victory over the enemy. In this they felt that should they be killed, it would not have been in vain. Their death being pre-avenged.

A year after the inception of today’s FAC, the top brass at GHQ decided to publish a record of the accomplishments of its members and to use
this listing as a means of creating rank and promotion in rank. And so, the Kanone List was born. The first list being published in issue #1 sent out in November 1967. At that time we had no idea the bookkeeping burden this would create for Commander Reichel in later years. (For many years, Ross P. Mayo shouldered that responsibility, but with his promotion to CinC, first Mike Welshans, and now George Bredehoft has shouldered the responsibility).

The FAC made it easier for its flyers than the requirements laid down for full-scale sky battlers. Everyone starts out as a Lieutenant in the FAC. Not even “First Lt.” or “Second Lt.” Simply “Lt.” After achieving 5 victories the Kanone is promoted to the next higher rank. The promotions continue for each step of the 5 new victories. After 16 confirmed victories in contest flying you are awarded the coveted “BLUE MAX MEDAL.”

Thus, we now have a few that sitteth at the right hand of Hung, Great God of Thermals.

Two of the most recent Blue Max recipients: 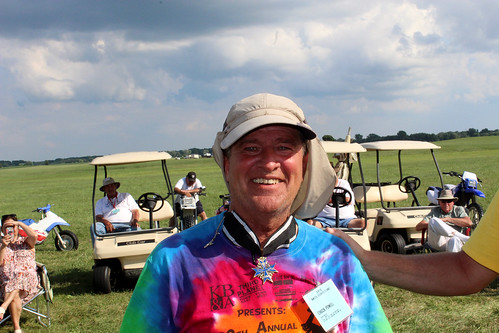